While earnings growth has held up (analysts still project 10.4% growth in calendar 2022 according to FactSet), it hasn’t been enough to offset the collapse in valuations.  Are valuations now cheap enough to attract persistent buying and end this bear market?  Probably not.  Current valuations are about 16x forward earnings for the S&P 500, and about 14x ex-technology.  When inflation is north of 8%, stock market bottoms usually occur at about 8x forward earnings, about one-half the current S&P 500 valuation (source:  Drach Market Research).  And what about the tech sector?  Current forward valuations on tech stocks are in the high teens, less than half the tech bubble peak in 2000 of 40, but still high.  Based on valuations, the bear market may have more room to run.  The good news is that there are select quality companies with forward P/E multiples of 10-12x that have caught our attention.

It is understandable why the market is so jumpy.  Continued high inflation will force the Federal Reserve to keep tightening, regardless of what the economic implications are.  That means higher rates (bad for valuations) and greater risk of recession (bad for the earnings outlook).  Last Wednesday’s Fed rate hike of .75% was the largest single increase in almost 30 years.

One thing is certain:  the current path of interest rates is extreme.  Over the last nine months, the two year U.S. Treasury note is up about 3%, the most extreme change in two year Treasury yields since the bond market carnage in 1994.  And market interest rates are going up faster than Fed interest rates, with 30 year fixed rate mortgages now over 6%.  In short, the current tightening is knocking on the doors of the fastest tightening since the Volcker shock in the early 1980s.

The recent University of Michigan Consumer Sentiment report was a surprise. The reading was so low that some economists not only question whether a recession is on the horizon, but instead if we are already in one.  We don’t think so, but will be watching this gauge and others closely for signs of trending economic strength or weakness.  On a yr/yr basis, the 41% decline in consumer sentiment represents the sharpest decline on record.  Every other period when the sentiment decline has been this severe points to a recession.

The real driver of weak sentiment is inflation.  Expectations for inflation over the next year are 5.4% – a level not seen since 1980.  However, one silver lining is that long-term inflation expectations remain relatively subdued at 3.3%.  If short-term expectations remain high, the Fed will find itself in even more trouble than it is now.

Although this commentary has a cautious tone, we recognize there are plenty of things that could go right.  On a more positive note, there are signs that we may have seen capitulation over the last few weeks setting us up for a bear market rally or even a bottom.  Here are a few developments that point to possible capitulation according to the bulls:

First, about 90% of stocks in the S&P 500 are trading in oversold territory (more than one standard deviation below their 50 day moving average).  A reading this high doesn’t usually stay this high for long.  In the graph below, the green line represents the percentage of oversold stocks:

PERCENTAGE OF OVERBOUGHT AND OVERSOLD STOCKS IN THE S&P 500 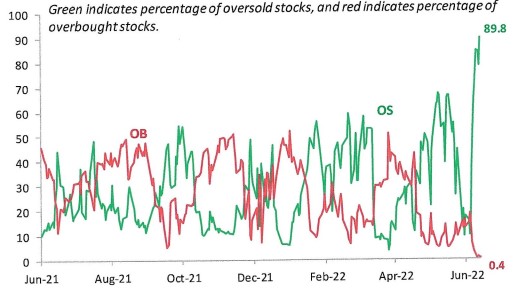 Second, last week included a day when 96% of stocks were down, which was part of an unprecedented run that saw five out of seven days with more than 90% of stocks down.  And for the first time in 50 years, 10 of the last 11 weeks have been negative.

These factors don’t guarantee a rally because the fundamentals remain negative but we wouldn’t be surprised to see an upward spike.  Will it last?  Of course we won’t know until after the fact.  But with the preponderance of fundamental factors still negative, we do not think the bear market is over.