Why Some Economists Are Warning A U.S. Recession Is Almost Inevitable … Are They Right? 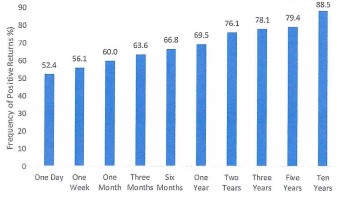 Our view is that stocks are “on sale.”  We think the consumer and our economy are strong and that we will avoid recession (see main section).  Many good quality stocks are down 30-40% from their highs and now sport attractive valuations.  The correction has been severe.  We are gradually putting new money and residual cash to work at values we have not seen since the Covid crash.

WHY SOME ECONOMISTS ARE WARNING A U.S. RECESSION

IS ALMOST INEVITABLE … ARE THEY RIGHT?

Here are the four most common arguments given today by economists warning of a coming recession in the U.S. – alongside a recession in Europe.  We will give our feedback on the arguments after these four warning signs are summarized.

First, overall consumer confidence in the economy has been falling in recent months.  About one-third of respondents in a recent poll were either negative or very negative on the U.S. economy, a high incidence of concern.  Sentiment has been declining since the middle of 2021.

The three major drivers of consumer sentiment are the job market, interest rates, and gas prices, and none of them are currently moving in the right direction.  Despite a strong job market, expectations for the U.S. unemployment rate have been deteriorating.  And even while the job market is expected to deteriorate from here, consumers have never been this confident that interest rates would be headed higher.  Lastly, prices at the pump have been surging.

Second, the yield curve continues to flatten, often a predictor of recession.  The spread between the yield on the 10-year and 2-year Treasury made a new post-Covid low last week at 22 basis points (100 basis points equals 1%), bringing it closer to the dreaded inverted range (when short rates higher than long rates).  If it goes to zero, the chance of a recession in the following months goes up to a high percentage.

Third, high yield spreads are widening (the difference in yield between a high yield bond (junk quality) and a Treasury bond).  When spreads rise like now it indicates risk aversion and usually negatively impacts stock prices.  Narrowing of spreads indicates that investors are willing to take on more risk, and that usually bodes well for equity prices.  See the graph below: 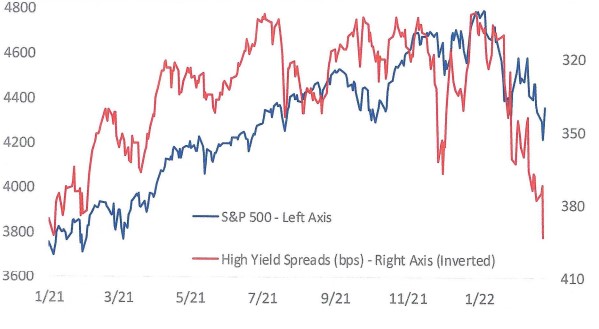 Notice the recent plunge in the red line.  This indicates spreads are rising which shows investor caution on the economy (note:  the right axis is inverted so the plunging red line denotes an increase in spreads).

Fourth, commodity prices have been on fire.  A big move up in commodities, especially in energy, can be a catalyst and partial cause for recession (like 2008).  This is not bullish for consumers.

The action in commodities since Russia invaded Ukraine has been unlike much we can ever remember.  Only time will tell how these price swings will impact profitability, but when earnings season kicks off in April, we are going to start hearing a lot about these moves.  A company’s ability to pass through cost increases is great for earnings but lousy for the consumer.

All four of these warnings should be respected and carefully watched.  However, we think the U.S. economy remains solid (although slowing).  For example, Goldman Sach is forecasting 2.9% GDP growth this year…  Consumer confidence may be flagging, but the American public continues to spend money as evidenced by surging retail sales.  And consumer balance sheets are in excellent shape…  The shape of the yield curve is going in the wrong direction but every inverted curve (we are not there yet) does not result in recession…  High yield spreads are volatile and can shrink as fast as they widen, but their trend now is sending a message.  And the bond market is at least as good a predictor of economic health as are stocks…  Energy inflation is a real concern.  Russian exports of crude and refined products accounted for about 7.5% of global supply before the war.  Removing a significant amount of Russian oil from the global supply should drive prices higher, although in the last week oil has retraced due to China growth concerns tied to a Covid outbreak.  February’s CPI increase of 7.9% yr/yr will likely go higher in the next few months.

Russia makes up less than 1% of our imports and exports, so we do not think the war in Ukraine or higher oil prices will derail our economic expansion.  Besides a strong consumer, the service sector is recovering post-Covid, and manufacturing is solid and growing.