The Market Is Exuberant, But Is It A Bubble?

S&P 500 performance this year has been dominated by the index’s largest components, and the disparity by cap size is great. So far this year, the 50 largest stocks in the S&P 500 are up an average 11.3% YTD through August 28th.  The 50 smallest stocks are down an average of 15.3% YTD with more than two-thirds of them down.

Two take-aways:  First, in 2020, the bigger the stock, the better the return.  Two, not every stock is soaring like the FANG+ names.  This hardly seems to be unbridled optimism.  (See the main section on “. . . Is It a Bubble?”)

Should investors fear the consequences of higher taxes if Mr. Biden wins the presidency? On an individual level, tax policy can have significant consequences.  From a market perspective, the data suggests other factors have overwhelmed tax policy.  Here are a few examples, including some very recent:

This doesn’t mean that raising taxes is good for the stock market.  Rather it suggests other factors often overwhelm the influence of tax increases.

THE MARKET IS EXUBERANT, BUT IS IT A BUBBLE? 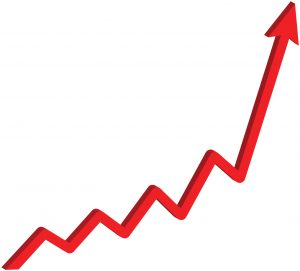 Market bubbles often involve investors buying without performing due diligence or worrying about the long-term prospects of their purchases.  Valuations are dismissed as irrelevant.  The expectation is that everything will keep going up.  The bubble is usually inflated by cheap money (sound familiar?).

Yes, there are signs of excess out there.  Valuations have risen to uncomfortable levels.  And the central banks are creating vast amounts of money and maintaining ultra-low rates.  Let’s take a look at low rates and valuations.

We prefer to focus on the cost of money, not the amount of it.  Lower rates increase the value of financial assets, especially stocks.  Discounting future cash flows at a lower rate increases the price of that asset.  Companies with steady earnings no matter what the economy does are worth more.  Those that are sensitive to the economy are worth less, because future earnings are expected to be hit at some point.  Growth stocks do incredibly well because their future earnings are expected to be higher and also worth more due to low rates.  U.S. stocks are more highly valued than in the past because they are dominated by big growth stocks with low rates acting as the cherry on top.

Are investors being totally irrational with their stock purchases?  No, they aren’t buying just anything, they are rationally buying things that benefit.  For example, online retailers win with more customers but internet taxi companies such as Uber lose as customers vanish.

For buy and hold investors like ourselves, risk control is extremely important in markets that go straight up.  Position sizes must be carefully managed.  Apple, Microsoft, Amazon and Tesla will not keep rising at the recent pace.  If a stock gets to a ridiculous valuation, it needs to be sold – even in taxable accounts.  New purchases should focus on areas where momentum hasn’t taken hold but rather on stocks with good growth prospects selling at below market multiples.