We don’t typically invest in embryonic companies or industries. Rather our investment focus is on larger, more established companies that are among the leaders in their industries. But we are always on the lookout for ‘new economy’ investment opportunities with large potential.

The investment research firm S&P Kensho has done extensive work on investment ideas for the new economy and analyzes how best to profit from today’s fourth industrial revolution. We will present some of the ideas we find most interesting.

Revolutions usually cause economic disruption. S&P Kensho states that prior industrial revolutions have caused significant disruption to the way people lived. However, in each case, “the net result has been an expanding, healthier, and wealthier fully-employed population,” according to S&P Kensho.

Here is a summary of the first three industrial revolutions which includes both major advancements and labor displacement:

We are now at the beginning of the fourth industrial revolution which is powered mostly by advanced science and technology research and innovation. Here is a partial list of new economy industries: 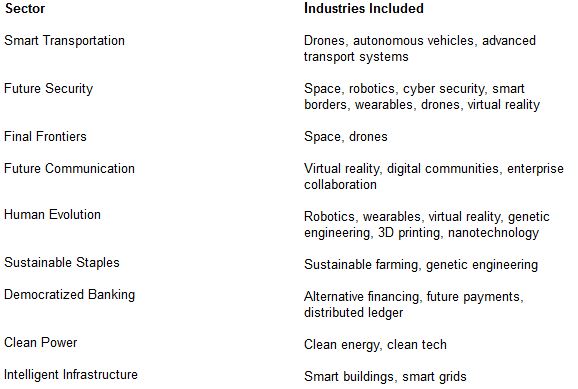 We continue to look for smart ways to invest in futuristic businesses–although the future is already upon us. For example, the Space Economy, which includes consumer TV, ground equipment, and government, is already a $368 billion industry (source:  CNBC, Morgan Stanley). Further progress in space is expected along this timeline:

Our preferred method of investing in these new frontiers is through larger companies that have the financial resources to withstand the uncertainty of new markets and the technology to make new ideas come to life. For example, Boeing and Lockheed Martin are both very active in the space industry, but their main businesses (and funding mechanism for future businesses) are in other areas–defense and aircraft, for example. As time goes on, more of their business will come from new economy products and services.

Research and investing in 21st century new economy industries is exciting because much of this new technology will change peoples’ lives–just like the internet changed our lives.