The Dominance of Growth Stocks Likely to Continue

In our last commentary, we noted the rebound in economic output was giving investors hope and largely accounted for the rally in stocks off the March low.  We also wrote of the risk of a resurgence of the virus which is now happening in a handful of states.  The flare-ups bear watching, but the original lockdowns were never going to eradicate the virus short of unacceptable economic pain.  More spread was inevitable once states started to relax their lockdowns.  But the health, social, and economic costs of shutting down the economy again are too high. Twenty-one million Americans are unemployed.  Many businesses and livelihoods have been destroyed.  Rhode Island recently reported a 22% spike in drug overdose deaths in the first three months of the year.

As some governors have started to reduce permitted activity, we are starting to see a decline in hours worked at small businesses relative to recent trends.  For the U.S. as a whole, the same trend is less pronounced but does appear to be starting.  Massive monetary and fiscal stimulus created potential for a strong rebound in activity, but as long as the virus remains a threat, activity can’t recover fully.  It will be a long haul, but Americans have managed through worse.

Bulls point to an accommodative Fed as one of the key factors in their favor.  So it makes sense to know what FOMC members have been saying in recent weeks.  First, economic activity has started to bottom.  Second, economic weakness will likely persist for a long period of time.  Weak labor markets and low inflation are far more likely than high inflation that requires policy tightening.  Third, the FOMC is arguing for more fiscal and monetary policy easing.  In our view, the Fed is not likely to tighten until labor markets are showing real strength.  We don’t expect a rate hike before 2023.

THE DOMINANCE OF GROWTH STOCKS LIKELY TO CONTINUE

The influence of value traders seems to have diminished since the bear market of 2007-2009.  Since then, growth stocks have trounced value stocks in cumulative performance.  Growth stocks typically have a ‘story’ and grow at higher rates in sales and earnings.  Hence, investors pay higher P/E multiples (and other metrics) for the luxury of higher growth.  Value stocks are cheaper based on traditional metrics (lower price/earnings, price/cash flow, low price/sales, price/book, etc.).  Very often value stocks are cyclical, and investors value cyclical stocks less because their results are more volatile.  We expect growth stocks to continue to outperform value for the foreseeable future for three primary reasons:

First, technology companies (considered growth) are now a much larger share of the global economy which explains why tech is the largest component of the S&P 500 index as shown in the pie chart below.  As a result, more dollars from index funds will flow into tech than other sectors pushing prices higher. 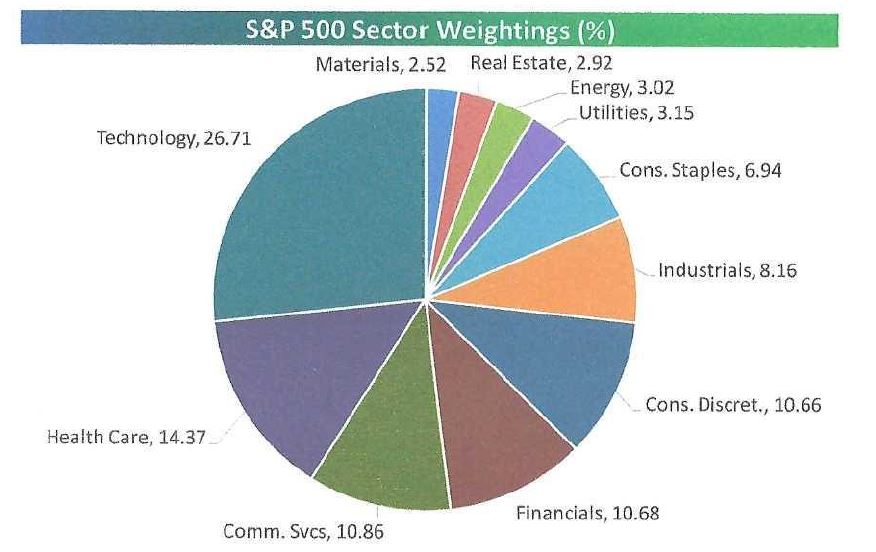 The five largest companies in America are all in the tech sector which tends to have higher valuations and higher growth.  For example, the FAANG stocks (Facebook, Apple, Amazon, Netflix, Google) all exhibit excellent growth in their respective businesses.  Remember, investors always go where the growth is.

Second, Warren Buffet’s success has created a lot of professional copycats (Mr. Buffet is known primarily as a value investor, although he has become more ‘growthy’ in the last decade).  Because of all these Warren wanna-be’s, looking for attractive value stocks is like looking for bargains along with thousands of expert buyers.  No wonder Buffet is sitting on over $100 billion in cash still looking for a home.

Third, loose Fed policy (among many other factors) has pushed stock valuations higher across the board.  For these higher valuations, investors would rather buy growth than ‘cheap’ assets because they are not cheap anymore.  Many quality value stocks today trade at 14-15x forward earnings compared to 7-9x when stocks overall are cheap.  So today’s value stocks are hardly a compelling value.

So, should investors shun value stocks completely?  No, not at all, primarily because value/growth cycles are unpredictable.  Value stocks will have their day in the sun, especially if growth stock valuations become silly.  And if we are near the beginning of a new economic cycle (and a new bull market), value stocks tend to do well in a ‘green shoots’ environment.  We will focus on growth for now, overweighting technology and consumer discretionary stocks.  We also like health care stocks which tend to be a nice blend of growth and value.