Tale of Two Breadths: Now Versus The Dot.Com Era

Technology stocks are back. After underperforming the broader market since last October, they sprang to life in June and early July.  Inflation fears have cooled which have sent rates lower, and the economy may be experiencing peak growth before the inevitable slowing.  These two factors have given investors confidence to buy tech again.  FANG+ stocks aren’t cheap – they trade at a 35% premium to the S&P 500.  But judging valuations on an absolute level is flawed because it doesn’t take into account the growth advantage these tech giants offer in the long run.  They deserve a higher multiple because of their superior earnings power (and consistency).  A tech company growing earnings at 25% should be valued much higher than a steel mill growing at 6%.

And mutual funds have been underweight the FANG+ group since 2016.  This cost them dearly in 2020 when tech stocks were all the rage during the lockdown.  A change in stance by these under-invested mutual funds could unleash a wave of buying power for tech shares, including FANG+.

Finally, the recent hawkish shift in Fed monetary policy adds another reason to favor these tech giants and other companies that tend to generate stable sales growth even as the economy eventually slows.

We think tech stocks, including FANG+, will be among the market leaders going forward.  We continue to hold a substantial weighting in tech stocks, about in line with the S&P 500 tech sector weighting of 26.2%.

The IPO market is red hot. The last week of June saw 19 companies go public in New York.  Most sold above the expected range and saw prices pop.  The best performer, China’s Pop Culture Group, closed up 345% on day one of trading.  Bears say this IPO market frothiness is more evidence of a market top but there appears to be no slowing in demand for the shares of new companies.  As expensive as IPO shares may appear to be, they are still less than the valuations of many private companies.

Bitcoin bulls have come under pressure. The digital asset fell 41% in the second quarter, the fourth-worst drop in Bitcoin’s decade-plus history.  The hype has left the market which is a problem since Bitcoin is driven largely by momentum and speculation.  Speculation in the coin has decreased dramatically with much less open interest in the futures market, and long versus short bets skewed toward the shorts.  Bearish sentiment surrounds the crypto-asset market.

This all leaves Bitcoin at a crossroads for the third quarter.  Bitcoin still has high-profile backers but also its skeptics like Warren Buffet.  We are in the Buffet camp.  Bitcoin is not a rational investment in our view.

TALE OF TWO BREADTHS:  NOW VERSUS THE DOT.COM ERA

Comparisons are always being made between today’s market and the late 1990s-the dot.com era.  The big similarity between the two periods is the dominance of technology.  Listening to what the market is saying is more important to us than what the pundits have to say, and the market continues to send a positive message.

The graph below shows the cumulative advance/decline line for the two periods – last two years and dot.com: 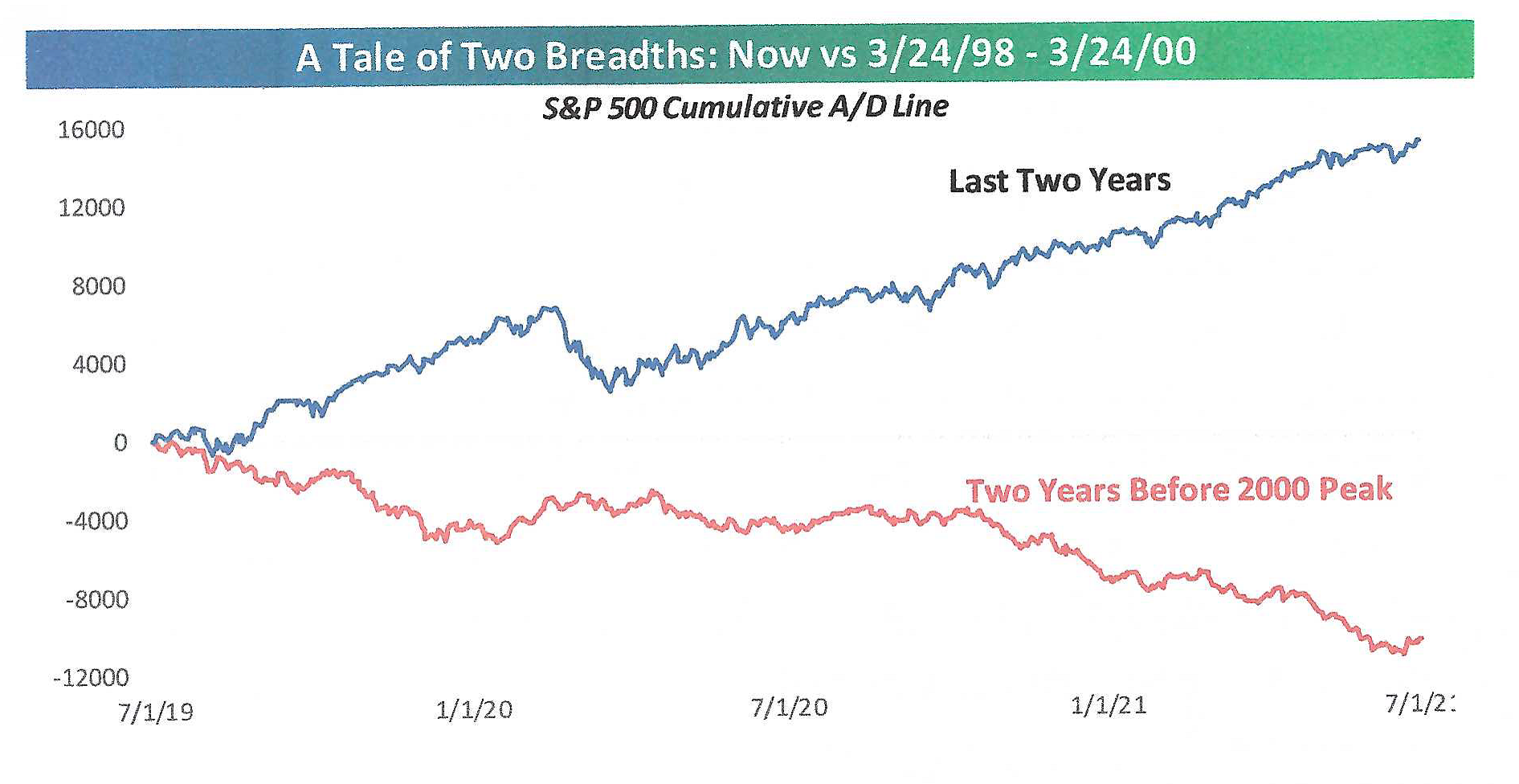 While the S&P 500’s cumulative advance/decline line was in a steady downtrend during the two years leading up to the 2000 peak, for the last two years it has been steadily trending higher.  That is a healthy sign of broad participation and what you would expect to see in the early stages of a bull market.  And, unlike 2000 when the largest stocks were trading on hopes and dreams, the mega-caps of today have real earnings and sales behind them.