The first graph shows the leading/coincident economic indicator ratio which is a fairly reliable predictor of recessions.  The ratio is still rising and doesn’t appear to have peaked.  On average, the ratio peaks over two years before the next recession. 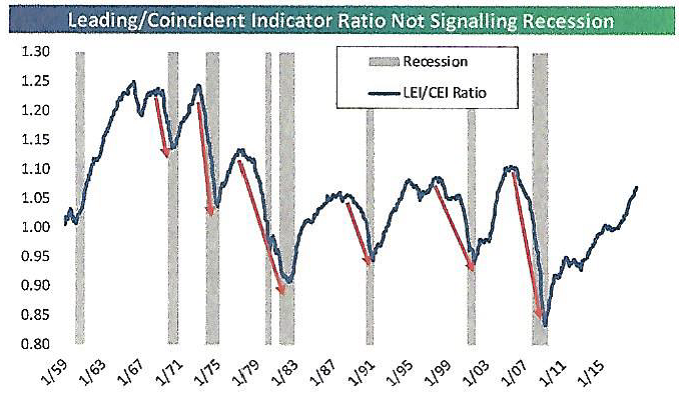 Next, rising short term interest rates induced by tight Fed policy can choke the economy into recession.  The graph below shows that nominal GDP growth is still greater than the Fed Funds rate signaling the cycle is not over.

“Risk On” in Fixed Income, Too

In the past eight trading days (through 01/15) Bloomberg’s high yield index, or “junk,” outperformed the U.S. Treasury index by over 3%!  This is all the more significant when one considers that the ten-year T-note yields only 2.75%.

But significant market threats remain including:

Rate hikes will likely return in 2019.  While the fed has temporarily paused rate normalization, unless adverse market volatility or recession threatens, additional rate hikes are likely later this year.

Global stagnation threatens.  Extremely high debt accumulation among governments, businesses, and households along with falling commodity prices support deflation.  High debt loads and falling prices cause stagnation and can be toxic to economies.

Ongoing trade policy frictions between the U.S. and China are unlikely to be resolved in a single “deal.”   Recent mission creep especially with the Trump administration’s desired solution to forced intellectual property transfer and outright theft adds another layer of complication to the negotiations.

Transition, in this case rate normalization, is challenging and the ride has grown noticeably bumpy.  Violent swings in risky fixed-income assets are becoming common as the debt cycle concludes.  2018 was the first year in over a decade to post losses across most of the fixed income universe.  We believe 2019 will be a poor performer as well – especially for high yield, lower investment grade, leveraged loan and emerging market debt sectors.