Sometimes it is hard to find glimmers of hope in the midst of a bear market.  Maybe last Thursday’s 1200 point surge in the Dow was an indication the worst is over.  Time will tell.

Seasonals, however, are very bullish right now.  Here is what we mean:  First, November and December have historically been two of the best months of the calendar year for equity markets.  Second, we are entering the six month window from November through April that has absolutely trounced the six month window from May through October.  Since 1928, the cumulative change of the S&P 500 (not total return) during the November-April window has been +5,145%, while the cumulative change during May-October has been just +277%. 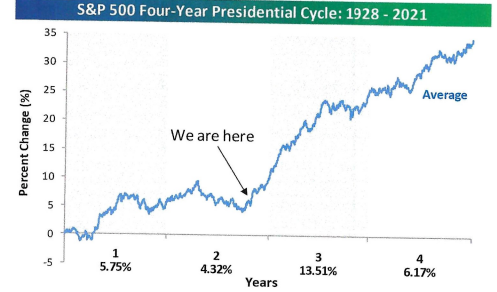 Will these bullish seasonal factors outweigh fundamental factors that remain negative.  Probably not.  But current market factors are not one-sided.  There are glimmers of hope for the bulls, including seasonals.

The end of the monetary tightening cycle is exactly what stock investors are looking for and any sign of that will likely spark a rally, perhaps a sustainable rally.  When the October CPI was released last Thursday, investors took the favorable report as a sign the Fed may slow future rate hikes and may even “pivot” early next year.  A 1200 point rally in the Dow ensued.  We think it is premature to expect a near-term pivot by the Fed, but a string of better inflation numbers and a weakening economy may force the Fed to stop tightening in order to prevent a hard landing (recession).

This is another black eye in the world of crypto.  Regulators are now under far more pressure to ramp up supervision of an industry that has so far thrived on opacity and a lack of clear rules.  The crypto industry is still the Wild West.

Crypto markets have lost some $2 trillion in market value over the last year, including Bitcoin which is 75% off its high from a year ago.  All of this is a lesson for crypto investors and the Fed, which encouraged excessive risk-taking by keeping real interest rates below zero for so long.  The crypto markets may be capitalism, but it is a speculative form of it.

We continue to advise our clients against making any investments in the crypto space.  This is not a place for serious investors, especially those retired or planning for retirement.