The stock market is off to an awful start this year.  With a YTD decline of over 13% through April, the S&P 500 is off to its third worst start since WWII, and the NASDAQ has never had a weaker start over four months.  So one would expect investor sentiment to be bearish, and it is.  But bearish sentiment is at a very extreme level as shown below: 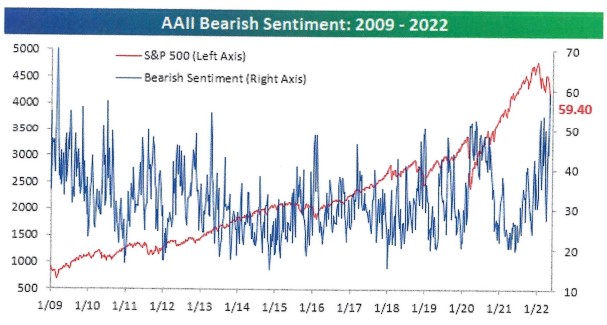 The blue line, bearish sentiment, stands at 59.4%, the highest reading since March 2009, right around the time of the Financial Crisis low.  The track record of this contrarian signal is good in pointing to attractive entry points into stocks.  Is it perfect?    But when sentiment is at this bearish extreme, the median returns over the following 3, 6, and 12 months were 9.8%, 15.4%, and 25.1%, respectively.  This indicator is flashing “buy.”

Earnings season has been decent so far. With about 70% of companies having reported, first quarter profits grew by more than 10%, surpassing expectations.  More than 75% of companies beat earnings estimates, but the market is not enthused.  The S&P 500 has dropped by 6% since earnings season began on April 13th.  Even some companies reporting triple plays (earnings beat, revenue beat, raise guidance) have seen their stocks trade down.  Instead, shrinking profit margins reported at some companies seem to be garnering more attention.  This is impacting a number of large-cap names that have supported the major averages up until about two weeks ago.

Here are some key comments made on last week’s earnings calls:

– “…we feel strong about consumer demand” – Whirlpool
– “Consumer spending is quite robust and the labor market has almost fully recovered.” – Automatic Data Processing
– “The U.S. consumer is in good shape” – McDonalds

– “We are still seeing inflated costs and quite a bit of disruption in our supply base.” – Whirlpool
–  Microsoft is experiencing “constraints from the shutdown in China.”
–  Apple noted that supply chain issues were significantly lower than they were last quarter before China began shutting down cities and factories again.

– Chipotle saw “very little resistance to the pricing so far,” as menu prices were raised by over 4%.  “Restaurant level margins continue to be impacted by unprecedented levels of inflation.”
– McDonalds raised menu prices by 8% and saw same-store sales rise.
– Apple stated “there are components that are falling and ones that are rising, and so not all of them are moving in the same direction.”

– Tech spend “as a percentage of GDP is, by the end of this decade, going to double” – Microsoft
– In order to mitigate semiconductor supply chain constraints, Apple developed the “world’s most powerful chip for a personal computer,” which is named M1 Ultra.

These comments help give us a read on key themes impacting corporate America and the economy as well as how individual companies are dealing with them.  Key takeaways include:  the U.S. consumer remains strong, many companies are feeling supply constraints, especially those that trade with China, a large number of companies can pass through price increases, and the current dizzying pace of tech development will continue.

Are we in a bear market? We all wish we knew the answer to this question.  While four months removed from the S&P 500’s last record high in early January, the S&P 500 is down “only” 11% from its peak, about half way to bear market territory (although many individual stocks and investors would beg to differ).  When we talk about bear markets, we often think of sharp declines, but most bear markets are long drawn-out events.

Fundamentals don’t seem to matter now as the stock market continues its decline.  Markets are re-pricing for a storm, despite solid fundamentals.  Valuations have dropped considerably.  The S&P 500 is now priced at 18x 2022 estimated earnings, about 15x ex-tech stocks.  Valuations are now very reasonable but not yet bargains.  Will we have to get to “silly season” before the market bottoms?  That is impossible to know, but capitulation seems closer at hand, especially after last Friday’s 3.6% drop for the S&P 500.

Last week the Commerce Department reported that GDP fell a seasonally adjusted 1.4% annual rate.  What went on with the economy gives a different story.

The report showed that private demand actually strengthened, with spending by U.S. consumers and businesses growing at a 3.7% annual rate.  Why the discrepancy with the negative print?

First, the trade deficit expanded, meaning that some of U.S. demand was met by other countries’ production.  That shaved 3.2% off GDP growth.  Also, companies didn’t build inventories as fast as in the fourth quarter, shaving an additional 0.8% off GDP.  These shortages have left inventories too low.  Companies will re-stock their warehouses throughout the year.  This should be a plus for GDP in the quarters to come.

The negative Q1 GDP print will not deter the Fed; rather the firming of demand might only motivate the Fed to keep raising rates until both inflation and the job market cool off.  We will learn more tomorrow when the Fed announcement comes after their two-day meeting.