Let’s start Q3 on a positive note.  If there has ever been a time that the market was “due” to rally, it is in the months ahead.  Historical gains are impressive after a two-quarter 20% drop like we just experienced.  Following a correction like this, the market has been up seven of seven times in the following year.  The median gain over three months is 8%, over six months 26%, and over 12 months 31% (source:  Bespoke Investment Group).  There is no guarantee, but it is not uncommon for equities to have sharp rebounds after the quarter and half-year we just had.

Also, the number of Russell 3000 companies, excluding financial firms, trading below cash levels on the balance sheet (167 companies) has surpassed the record set in the global financial crisis (165 companies, February 2009, source:  Bloomberg).  This could be a sign there are bargains to be found.

How have Roe and the January 6th hearings affected the betting markets for the mid-term elections? According to Electionbettingodds.com, the odds for Republicans to take control of the House remain elevated at 85%.  In the Senate, the race for control is much closer with Republicans now priced at 60% to take control, down from 75% just last week. 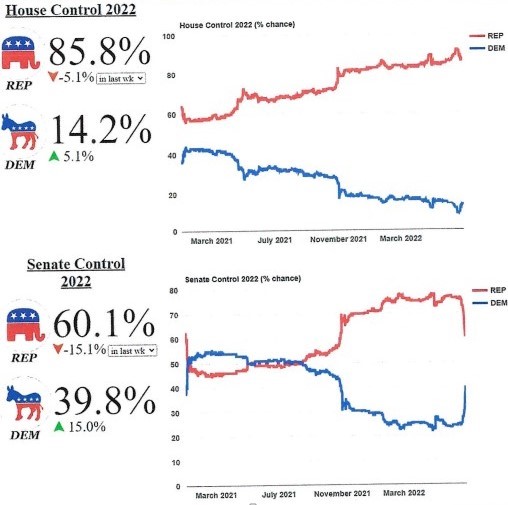 ARE WE ALREADY IN A RECESSION?

Since we wrote about the economy in the May commentary, there has been a steady stream of disappointing economic news which has greatly heightened the recession watch.

If we are now headed towards a recession, this one may be the most anticipated ever.  Many economists and investors are gearing up for a 2023 recession, but many others think that day is already here.  If you accept the casual definition of recession – two negative quarters of GDP growth in a row – we may already be in one.  After a negative Q1 GDP print, the Atlanta Fed just downgraded Q2’s expected growth to (2.1)%.

However, the National Bureau of Economic Research (NBER) is the official arbiter of U.S. recessions.  This small group of mostly academic economists place dates on when recessions begin and end, going back to 1857.  They do not use the two consecutive quarters of negative GDP growth rule.  Rather, the committee looks at a range of monthly and quarterly indicators including output, income, manufacturing, sales, and, perhaps most important, employment levels.  Then it makes a judgment call.

The U.S. has never had a recession in the post-WWII era with a jobless rate this low.  Will this time be different?  We might have a situation where other indicators point to a recession, but the labor market doesn’t.  This unusual conflict could last for a while.

What is the Fed saying about the slowing economy?  Well, it is confusing.  After the mid-June policy statement, officials noted that “economic activity appears to have picked up.”  Ever since then, we have seen a parade of weaker-than-expected economic reports.  This doesn’t look like an economy “picking up” steam.  Despite this, there has been no change in Fed commentary.

Ironically, just as the Fed pivoted to a much tighter bias, inflation data has moderated.  Durable goods prices have fallen for three straight months, asking rents are plunging, and many commodity prices are easing, among other factors.  The core PCE (Personal Consumption Expenditures) may continue falling towards pre-pandemic norms.  It seems to us the FOMC’s abrupt shift towards emergency levels of tightening is misplaced.  Powell and company claim they are data-driven, and recent data suggests that further hawkishness in their actions is not necessary.  We prefer a more moderate Fed approach going forward.

What about corporate earnings?  Estimates are not yet being cut despite lower output and higher costs for many companies.  What are analysts waiting for?  According to economist Ed Yardeni, “Apparently, the analysts have yet to get the recession memos from the managements of the U.S. companies they follow.”  We expect analysts to mark down forward estimates as companies begin to report earnings next week and give uneven guidance.

Our bottom line:  We are not yet in a recession based on historical NBER guidelines.  A recession is not inevitable, but we are moving in that direction.  This may end up being a peculiar recession with employment remaining firm.  Tomorrow’s non-farm payroll and unemployment report will give us more insight into the health of the jobs market.