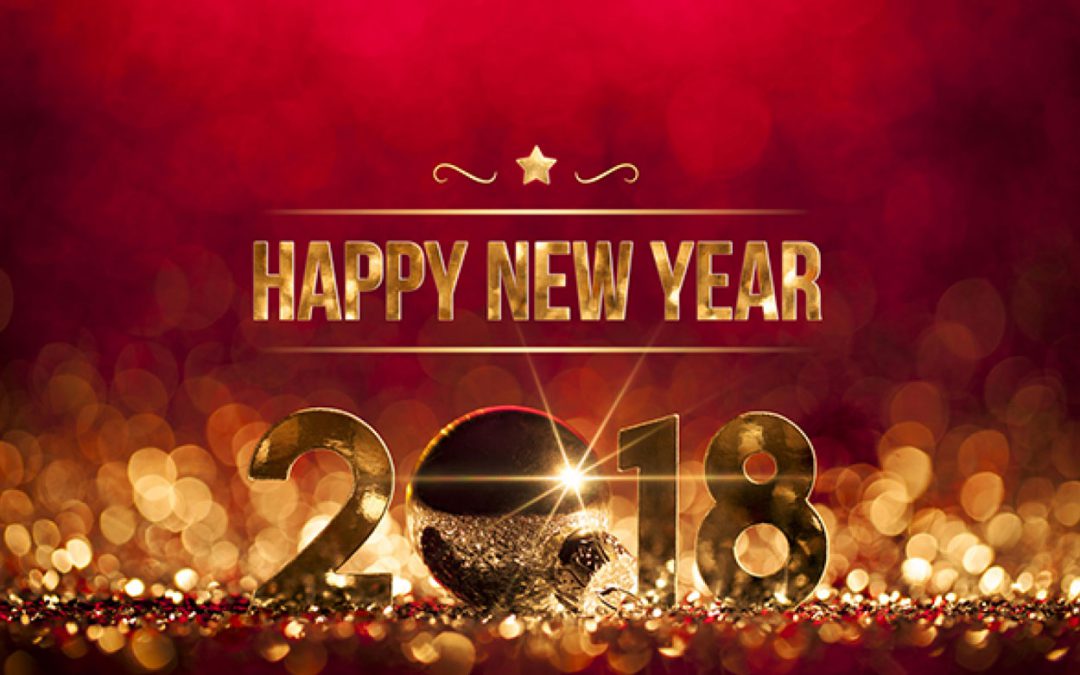 It is with warmth and sincere gratitude that we at Clearview wish you a fulfilling New Year.

Every year is the same; Wall Street is forecasting a 10% return for stocks for 2018. Some firms are projecting even higher returns seemingly trying to out forecast their competition. The truth is that no one can predict the future and putting a price or return target on the market is folly. Instead, we will look at the most likely factors to impact stock prices this year-both good and bad

We have identified three powerful factors on each side of the ledger sheet likely to influence stocks in 2018. Of course there are many more variables that can and will move prices, but here are the most potent:

U.S. Earnings Growth: Profits were expected to grow this year over 10% (pre-tax reform) but expectations are being ratcheted up to 15%+ which includes the effects of the recently passed tax legislation. Without a change in the market’s 2018 P/E ratio, we are looking at a potential 15% gain in stock prices. And even with a three multiple decline in the P/E multiple (from 18.5x to 15.5x) stock prices would be about flat for the year.

Tax Reform: Cutting the maximum corporate tax rate from 35% to 21% is an unmitigated bullish event for the equity market. It is like giving a shot of adrenalin to a healthy patient. The U.S. corporate sector is very healthy (near peak profit margins over the last 70 years) and cutting taxes will likely make the sector even healthier.

But tax reform is more than reducing corporate tax rates. It also includes a lower tax on the repatriation of overseas cash, expensing equipment purchases, and lowering taxes on individuals which will hopefully spark more consumer spending. Will tax reform provide the same stimulus as (hypothetical) QE 4?

Accelerating GDP Growth: Global growth in GDP is synchronized and momentum appears good. Global gross domestic product should rise 3.9% this year, up from last year’s 3.3%. U.S. GDP is expected to grow over 3% this year (thanks to an expected 0.7% boost from tax reform). Rising wages and employment gains give economists confidence this trend will continue in the U.S. There is no recession in sight.

Valuations: Investor calm and the lack of market volatility make it appear many investors don’t care much about equity valuations. We do. We have frequently mentioned in this Commentary that valuations (by a number of common measures) have only been higher in 1929 and 2000, both years followed by a decade of turbulent and sharply lower prices. A catalyst may be missing (which combined with high valuations may be a tipping point) but is not always necessary. Markets trade on expectation which are high as evidenced by rich valuations.

Rising Inflation: Although inflation remains low, pressures are building. The pickup in global demand and the dollar’s weakness are pushing up commodity prices and import costs. And with the unemployment rate on pace to dip below 4% soon, wages are likely to heat up. These trends could cause the Fed to change its current market-friendly strategy.

Fed Tightening: The Fed seems likely to raise rates three times next year, and perhaps more if tax reform provides the anticipated spark to the economy. The Fed will also continue the process of shrinking it balance sheet which it commenced in October. The initial amount of bonds it hasallowed to roll off is small, but it plans to raise the amount it rolls off this year. Other central banks are tightening as well which could have an impact here. The ECB, or European Central Bank, expects to wind down its quantitative easing program by the end of 2018.

Where We Stand: As you can see, both the bulls and bears have strong cases. However, valuations may trump some of the ‘good’ news because they show that many positive factors may already be priced in. Stock prices don’t grow to the sky. We need occasional corrections to weed out the weak holders of stocks who aren’t committed to the long term. And recently we have not been getting those healthy shake-outs. When markets fall they usually fall for a reason. The usual culprits are recession (no), falling corporate profits (no), and central banks aggressively pushing up rates (a strong maybe).

The historical probability of a loss in stocks is 25% in any one year, 13% for a loss greater than 10%, and 6% for a loss greater than 20% (source: Richard Bernstein Advisors). The odds may be higher now than these 90-year-old figures show simply because of excessive valuations. We continue to overweight defensive sectors, are focused on cheaper ‘value’ stocks for new purchases (many value stocks did not participate in the 2017 rally), and will simply hold cash when attractive investments can’t be found.

Our Opinion of Bitcoin

On Friday, December 22, Bitcoin plummeted 25% before bouncing back and finishing up on the day. This shows that demand for this cryptocurrency remains strong with an ever increasing amount of investors interested in buying this currency. Why is Bitcoin popular? What are its advantages and disadvantages as a cryptocurrency?

First, cryptocurrency is the epitome of an open market. Anybody can come along and offer a product (there are now over 1,300 altcoins). But Bitcoin has been the most popular and most widely used for transactions, although other cryptocurrencies saw even greater price appreciation last year than Bitcoin.

Advocates say that Bitcoin has many practical advantages-potentially reducing transaction costs and settlement times, protecting privacy, and preventing governments from debasing its value. However, in our opinion, the bullish case for Bitcoin is flawed. Instead, we would steer clear of Bitcoin for a number of reasons including that it is not backed by any government, it is not clear it can’t be hacked, it has no intrinsic value, sentiment is frenzied, and the run up seems to have no fundamental basis.

Bitcoin may end up in a bubble, which is much broader than speculation. Bubbles go beyond the financial markets and pervade society. In summary, bets on cryptocurrencies are still very speculative and risky. Bitcoin investors need to keep this in mind.

As we have seen over the past several years, the growing concentration of wealth (described in the chart below) creates uncertainty and polarization in politics while threatening stability in economies. The 2016 election of “populist/nationalist” Donald Trump may be attributable to this unfortunate and potentially dangerous trend. Bear in mind that the bottom half of wage earners have seen no income growth since the 1970s on an inflation-adjusted basis.

Recent hyper-accommodative monetary policy on the part of central banks worldwide, and the rally it encouraged, has added greatly to this distributional inequality as only those with investments enjoyed growth. For those without portfolio assets only frustration has accumulated. The greater the disparity in household wealth, the greater the risk of instability and unanticipated consequences.

Interestingly this trend is not about political parties so much as the need for change. At the extreme, its ultimate impact may cause class warfare and thus resurgent socialist policy (i.e. the growing popularity of Bernie Sanders). The trend is evident today in areas such as trade policy frictions, entitlement growth and relaxed fiscal discipline.

While portfolios have benefitted greatly from the post 2009 rally, growing political and economic risks along with stretched valuations place further gains in jeopardy. Those who have benefitted most from the recovery may be at risk of growing volatility and significant market corrections. Innovative government policies intended to redistribute wealth and restore stability may follow as well.