The sharp drop in share prices last Friday was attributed to the expected invasion of Ukraine by Russia. Although that prospect is a disturbing geopolitical event, any U.S. stock market reaction is likely to be limited and short-lived.  The U.S. stock market typically only reacts to events affecting our economy, and this potential war will have very limited impact on us.  Russia’s last invasion into Ukraine, the taking of Crimea, was a non-factor in U.S. equity pricing.

The auto industry is a bellwether for the U.S. economy. No set of companies better summarizes U.S. economic and market conditions than the automakers.  Autos are a strong proxy for consumer demand, the cost of money, supply chain issues, the energy transition, capex, and technological deployment.

Earlier this month GM and Ford expressed more confidence that the global pinch in chip supplies would ease.  GM said it expects to deliver 25% to 30% more vehicles to dealers this year, while Ford said it expects global vehicle deliveries to increase by 10-15%.  Clearly, some progress has already been made given the huge surge in auto sales reported for January.  Carmakers worry that they are missing out on sales.  According to Nissan’s chief operating officer, “Our problem isn’t how many we can sell, it’s how many we can produce.”

Hopes of easing supply chains, big investment in electric vehicles, and autonomous and connected cars are balanced with the cold hard realities of less profitable sales, an approaching headwind to payments from Fed rate hikes, and the challenge to cash flow that comes with plowing billions into a re-working of an entire industry.

We will be closely following developments in the auto industry to confirm our thinking that the U.S.  economy is on solid ground.

We have seen one of the most rapid flattenings of the yield curve in years. In less than a year the spread on the yield between the 10 and 2-year U.S. Treasury notes shrunk from a peak of 158 basis points to less than 45 basis points.  The market appears to be pricing lower expectations for growth.

A rapid flattening of the yield curve by itself isn’t worrying.  There have been plenty of times in the last 45 years where the yield curve flattened by similar amounts and the economy was just fine.

In our view, the economy is slowing but still growing nicely.  Short of a major Fed policy error, our economy should continue to prosper and the bull market along with it.

While last week’s CPI report showed elevated inflation levels, there is reason to believe that core inflation will start to settle down.  First, what is causing the 40 year high in consumer price inflation?  Much of the recent shock to total CPI has come from durable goods.  Recent durable goods inflation has unwound more than two-thirds of the past two decades of deflation in less than two years!  The graph below shows the shocking rise in durable goods inflation: 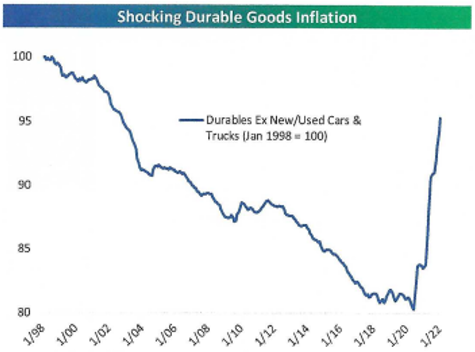 The combination of massive consumer demand and frozen supply chains have sent durables prices soaring.  The good news is that this category is likely to stop rising at its current pace as supply chain disruptions cool and interest rate hikes dampen demand.  If durable goods inflation can be tamed via weaker demand and a higher cost of borrowing, we see a deceleration in core inflation as likely.  The trajectory of durable goods inflation may be the single-most-important determinant for the direction of overall inflation in the U.S. during 2022.