Coming into this earnings season, analysts had a fairly dour take, estimating earnings growth will be 5.6%.  But this number includes estimated energy company earnings up 249%.  Ex-energy, the S&P 500 earnings will register a 3.4% decline, according to Wall Street.  Earnings are expected to grow 10.7% in Q3 and 10.1% in Q4.

Although many CEOs are cheery about their businesses, profit margins are at risk and forecasts might not be met this and future quarters.  The combination of continued labor, raw material, inventory, and transport cost pressures coupled with decelerating demand poses a risk to margins that are not yet reflected in consensus margin estimates.

As recession worries swirl, companies appear remarkably upbeat about their own businesses in the near term, which might translate into cautious optimism on earnings calls.  The perception is that things are not so bad out there.  Maybe the optimism is misplaced.  If the economy does enter recession, companies may find out they are not as prepared as they think.

Our take is that there will be tremendous pressure on margins and profit growth.  Estimates may  have to come down further.  This, along with rising interest rates, will make it difficult for the current rally to continue.  We expect the market rally to pause until the margin issue is sorted out.

WAS JUNE 16TH THE BOTTOM?

The S&P 500 index has bounced 12% off the June 16th low.  If this bear market is over, it would have been shorter and less extreme than the average bear market.

The most dramatic variable is investors fighting the Fed.  It is hard to know how high rates will go and over what time period.  The market is now assuming smaller hikes later this year, and then a Fed pivot in 2023 when they start to lower rates.  This seems to be why the market has been rallying.  However, with high inflation and a strong jobs market, the Fed could raise rates higher and longer than expected which may spook the markets.

Also, earnings growth is slowing while the Fed is still tightening.  This is the worst possible combination for investors.  See the box below:

Profit growth estimates are still hearty for the rest of 2022 and also 2023.  However, margins may be squeezed later this year so estimated earnings growth projections need to come down, in our view.  We explained why in the preceding bullet point.

Finally, in order to reduce inflation, the Fed is raising rates at the fastest pace and largest magnitude in more than 40 years.  But the economy is far more sensitive to interest rate changes than it was then due to a debt load that has more than doubled.  See the graph below showing domestic debt ÷ GDP since 1945.  The debt load is twice the rate of the early 1980s: 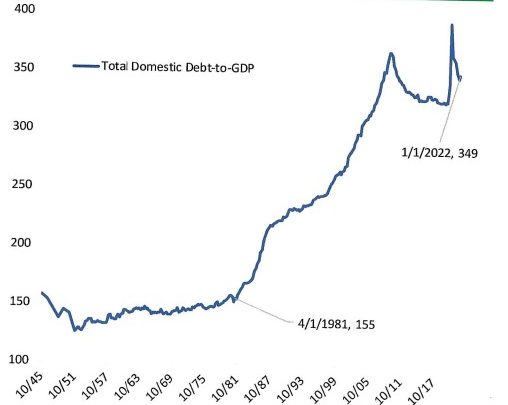 The preponderance of fundamental analysis is negative in our view:  decelerating earnings growth along with a tight Fed, among other factors.

It has been a big two weeks for market technicals, and while bulls have made some progress, we are still not out of the woods.  Breadth has been supportive of this rally.  Semiconductor stocks (a leading indicator by our measure) are not giving us any indication regarding the broader market.  The most beaten-down stocks (very often low quality) have been leading this rally off the lows, but does that say anything about its durability?  Not really.

Overall, technicals remain weak and don’t yet support the idea this is a new bull market.

Negative sentiment remains one of the most bullish arguments you could make about the broader market.  Bearish sentiment reigns supreme with the AAII Survey (American Association of Individual Investors) and the Merrill Lynch Fund Manager survey.

Do you know who is still bullish?  The Fed.  They are so bullish on our economy they raised rates by 75 basis points after their last two meetings, even after their own GDP NOW model correctly predicted two consecutive quarters of negative GDP growth.  Go figure.

To summarize, we place the most emphasis on fundamentals, which are clearly negative as we see it.  True, a bull market climbs a wall of worry, but we are really paddling upstream.  Between tight monetary policy (including QT – quantitative tightening) and decelerating earnings growth, we question how far this rally can go.  It has been a great ride since June 16th, but there are choppy waters ahead.